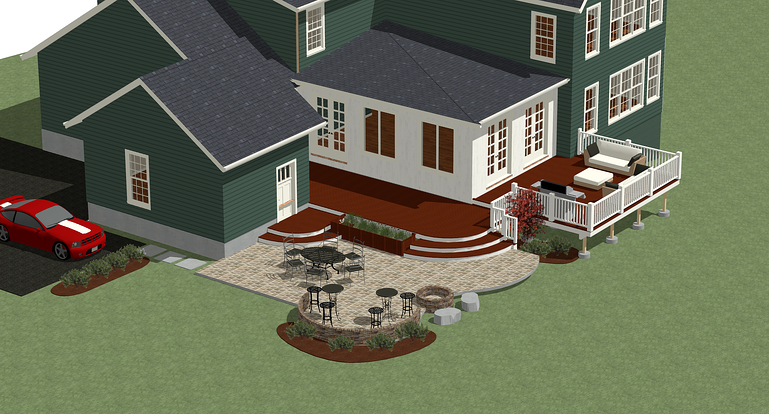 Mike and Cindy were ecstatic to move into their beautiful new home in Maple Lawn, Maryland a short time ago. Complete with all of the bells and whistles one could ask for, it lacked one important thing: an outdoor living space. With two active daughters and a puppy named Scooter, they needed a way to utilize their four exterior exits as gateways to their acre of backyard property.

The homeowners liked the idea of a patio but believed one to be unfeasible due to the elevation of their rear doors and the slope of the their backyard. They did not like the idea of a screened enclosure and figured they would have to settle strictly for a deck, forgoing the organic shapes and accessibility patios have to offer.

Being an active couple that enjoys entertaining, they also requested space for a grilling area, a table to seat eight people, a sitting area, and a fire pit. Mike, who owns his own business, envisioned hosting company events in the outdoor space so he wanted an area large enough to comfortably accommodate several guests without having to worry about overcrowding.

Not only was a patio feasible, but it would be ideal for entertaining if erected directly behind the garage. This would render it easily accessible to guests parked in the driveway or street, who would be just a few stepping stones away from the patio and its several features:

Even with large gatherings there would be plenty of seating and areas to eat. With Scooter and the kids playing in the backyard, the proud parents would have a great view from the deck as well as the lower patio. The Fourth of July will never be the same for this Howard County family!